With the recent advancement in JavaScript, which is ES6 or ECMA Standard Level 6, there are few changes introduced to the JavaScript language and one of it is the Fat Arrow Functions. These are a more concise syntax for writing function expressions. They utilize a new token, =>, that looks like a fat arrow. Arrow functions are anonymous and change the way this binds in functions.

What are fat arrow functions?

Arrow functions make our code more concise, and simplify function scoping and the this keyword. They are one-line mini functions which work much like Lambdas in other languages like C# or Python. (See also lambdas in JavaScript). By using arrow functions, we avoid having to type the function keyword, return keyword (it’s implicit in arrow functions), and curly brackets.

Difference with the traditional functions?

We can see a great difference between the traditional functions that use the function keyword vs. the new ones. Let's consider the following code uses the traditional style.

Now the whole content of say about 50 characters is compressed into the new ones, which is just 25ish characters:

This is about 50% reduction in size, which is great, but thinking about the cleanliness it boasts, it has some dangers too:

From the official ECMA 262 specification page, it has described in the Runtime Semantics: Evaluation:

Arrow functions were introduced with ES6 as a new syntax for writing JavaScript functions. They save developers time and simplify function scope. Surveys show they’re the most popular ES6 feature: 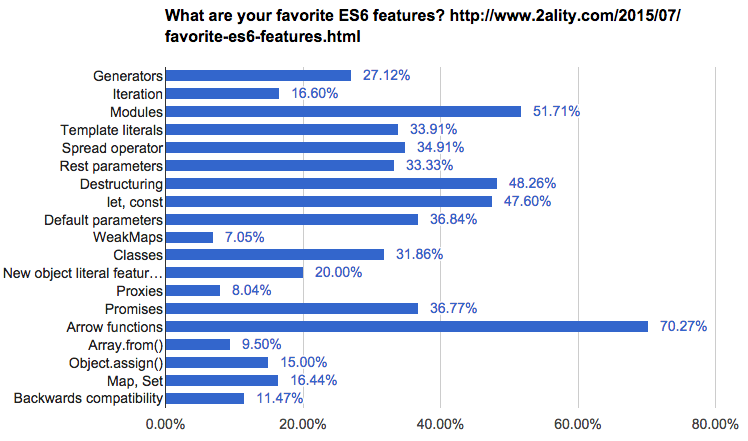 The problem now is that there seems to be no way you can send any arguments to the functions defined this way. This means, at the prototype level, the arguments is not defined in the function.

On Google Chrome, when the above is executed on Developer Tools JavaScript Console, we get this.

That's what the recent versions of Chrome, Firefox, and Babel says. The above syntax is "invalid" as arrow functions should be using their parent scope for arguments. The only info I've been able to find that contradicts this is a single comment saying this was rejected by TC39, but I can't find anything to back this up in the official docs or specification.

However, if we do want to capture the args for your arrow function, we can simply use a rest parameter (Babel • MDN).

The same above code can be restructured this way:

And here we go!

With Google Chrome's Dev Tools, we get this:

But at the same time, the good part of JavaScript interpreters are the way they give the error messages. Say, you put the Rest parameters in the middle or at the front, this is what the code looks like.

And with our all good Chrome Console, we get an Uncaught SyntaxError:

Now we now know what could be the best way to add the arguments to fat arrow functions. We also know now how to go around the official specs (I mean, thinking out of box) and achieve what we are expecting. I really hope this has helped someone who's struggling with this concept.